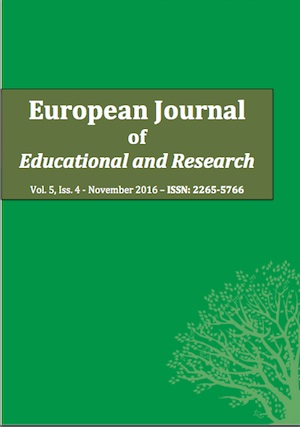 Improving the Perception of Self-Sufficiency towards Creative Drama

The aim of the study was to investigate the effect of performance feedback (PF) provided to student teachers working with students with multiple disabilities and visual impairment (MDVI) on their teaching skills. The study group of the research was composed of 11 student teachers attending to the final year of the Teaching Students with Visual Impairments Program at a university in Ankara, Turkey. A quasi-experimental design, was used in the study. These student teachers recorded their classes for pretest and posttest and these video-recorded classes were thereafter watched by the observer, who completed semi-structured observation forms for each student teacher. The results of the analysis suggested a statistically significant difference between the pretest and posttest scores of the student teachers involved in the study before and after the performance feedback. The findings of the study were discussed in the light of the relevant literature and practical recommendations were included.

The aim of this research is to develop a scale to determine the language teaching methods used by English teachers. The research sample consisted of 300 English teachers who taught at Duzce University and in primary schools, secondary schools and high schools in the Provincial Management of National Education in the city of Duzce in 2013-2014 academic Year. Data collected were subjected to Exploratory and Confirmatory Factor Analysis and the Cronbach Alpha reliability coefficient was computed. The Exploratory Factor Analysis results showed that the scale consisted of 5 factors. These factors were named as Active Teaching Method, Listening Based Teaching Method, Four Basic Skills Based Method, Speaking Based Method and Grammar Based Method. The total variance explained by the 5 factors was determined to be 54.69%. The Confirmatory Factor Analysis results confirmed the 5-factors structure. The Cronbach Alpha reliability coefficient was computed as .89. It is thought that this scale can be used to identify language teaching methods that English teachers use as a reliable and valid scale.

This study tested and integrated the effects of an inquiry-based didactic method for preschool science in a real practical classroom setting. Four preschool classrooms participated in the experiment (N = 57) and the children were 4–6 years old. In order to assess children’s attention for causal events and their understanding at the level of scientific reasoning skills, we designed a simple task in which a need for information gain was created. Compared to controls, children in the post-test showed significant learning gains in the development of the so-called control of variables strategy. Indeed, they executed more informative and less uninformative explorations during their spontaneous play. Furthermore, the importance of such programmes was discussed in the field of STEM education.