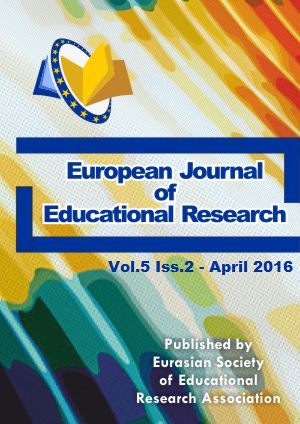 Adaptation of Distributed Leadership Scale into Turkish: The Validity and Reliability Study

The purpose of this study was to adapt “Distributed Leadership Scale” originally developed by Davis into Turkish Language. A total of 386 participants including teachers employed in high schools in Tokat participated in the study. Explanatory Factor Analysis (EFA) and Confirmatory Factor Analysis (CFA) were performed to test the structural validity of the scale. EFA results illustrated that adapted scale consisted of seven factors. In the light of the original scale form, these factors were named as “School Organization”, “School Vision”, “School Culture”, “Instructional Program”, “Artifacts”, “Teacher Leadership”, “Principal Leadership”. The scale consisted of 34 items and reliability coefficients for the subscales from .75 and .92. Results finally revealed that Distributed Leadership Scale-Turkish Adapted Form is a valid and reliable measurement tool to be used in describing the distributed leadership behaviors in schools.

Education in Emergencies: Case of a Community School for Syrian Refugees

With the break of the civil war in Syria, many Syrians have been displaced either internally or as refugees. Turkey, one of the leading host of Syrian refugees, has made changes to the policies to accommodate the needs of Syrians. Education is one of the most prominent needs of displaced refugee children. While 80 percent of refugee children living in camps have access to formal education, only small number of children living outside the camps are attending schools. With the increased number of children, many of the governmental organizations, municipalities, and NGOs have been involved in an effort to establish schools for Syrian refugee children living outside of the camps. This article reports the results of a study conducted at a newly established host community school for Syrian refugee children in the City of Gaziantep during the 2014-2015 school year. The aim of the study was to look at the experiences of administrators, teachers, and a parent who were involved in the establishment of the schools. The study made use of qualitative case study methodology, where interviews, focus group, and field notes were the data sources. The results of the study indicated that there were many systematic challenges involved in the establishment of the school, but nevertheless the teachers, administrators and the parents were happy to have the opportunity to be involved in this effort. The curriculum used in the school provided cultural relevance for the students and made their transition to the context easier. Although the school was established with support from the municipality for that year, there were not solid plans in place to provide sustainability of the school. This study provides a unique insight into the current status of Syrian refugee children living in Turkey and should serve as a bridge to policy makers in designing educational programs for refugees.

The Effect of 7E Learning Cycle on Learning in Science Teaching: A meta-Analysis Study

This article reports the results of a meta-analysis of the effectiveness of 7E learning cycle in science teaching. Totally 35 different effect sizes from 24 experimental studies, comprising 2918 students were included in the meta-analysis. The results confirmed that 7E learning cycle have a positive effect on students’ achievement. The overall effect size (Hedges’s g) value obtained from independent studies was calculated as 1.245 (% 95 CI, SE = .148) between confidence intervals 956 and 1.534 according to the random effects model. Among all effect sizes 32 had a positive effect whereas 3 of them had negative effect. A number of sub-group analyses (school level, type of publication, subject matter and duration) were conducted. The effect of 7E was not significant for school level, type of publication and duration. However, regarding the subject matter a significant difference was observed. The high effect size calculated in this meta-analysis implies that the 7E learning cycle is a useful strategy that should be included in science curriculums.

Developing the Scale of Teacher Self-Efficacy in Teaching Process

The purpose of this study is to develop a reliable and valid measurement tool which will reveal teachers’ self-competences in education process. Participants of the study are 300 teachers working at state primary schools in the province of Gaziantep, Results of the exploratory factor analysis administered to the scale in order to determine its construct validity, indicated that it has four sub-dimensions. In accordance with the results of confirmatory factor analysis RMSEA was measured .050 level fit index. The determined levels for GFI is found to be 0.88, whereas for AGFI, 0.85 for NFI, 0.94 for CFI 0.98 and 0.94 for RFI. Also, non normed fit index, (NNFI) has been observed as 0.97. Four dimensions of the scale which was composed of 23 items account for approximately 54% of the total variance. Cronbach's alpha coefficient of internal consistency was counted .86 for the first dimension; .82 for the second dimension, .67 for the third dimension, .70 for the fourth dimension, and .92 for the entire scale. The scale, developed in order to measure teachers’ self-efficacy in the teaching process, proved to be valid and reliable based on the results of the related analyses.

Measuring the quality of the ‘product’ is elemental in education, and most studies depend on observational data about student achievement factors, focusing overwhelmingly on quantitative data namely achievement scores, school data like attendance, facilities, expenditure class size etc. But there is little evidence of learner perceptions. 553 students from two different universities, who graduated from 3 high school types, were asked to respond to two fundamental questions to reflect on school and classroom level achievement factors. 2294 responses produced eight categories in question one, teacher factors being the most preferred (n=424), followed by individual factors (n=404) and then family factors (n=395). As for liking towards a course, 1362 responses were produced, most frequent one being teacher’s attitude (n=205). Results indicate student perspective of causes of achievement is somewhat different from those expressed in quantitative studies. Girls attributed more achievement to study habits, family support whereas boys attributed more to school and technology. More emphasis is needed on perceived achievement factors for a sound evaluation of effectiveness in school.