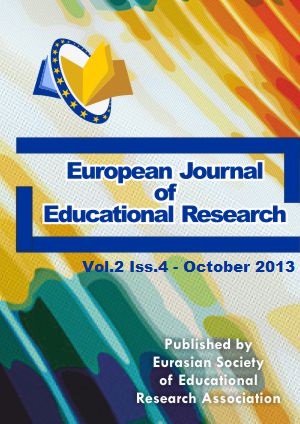 Teachers’ Beliefs and Technology: Calculator Use in Mathematics Instruction in Junior Secondary Schools in Botswana

This study sought junior secondary school mathematics teachers’ beliefs about calculator use in mathematics instruction in Botswana and was descriptive in nature adopting a survey design. The sample of seventeen (17) mathematics teachers from four (4) junior secondary schools in the Tutume Sub-district in Central Educational Region was selected through a purposive random sampling procedure. A questionnaire comprising both closed and open ended questions was designed to collect data then the analysis of results was carried out using descriptive and inferential statistics. As an illustration, a t-test was used to test for differences in teachers’ beliefs by gender while a one-way ANOVA was used to test for difference in their beliefs by experience. The study revealed that most of the teachers expressed their lack of confidence and were incompetent with the use of a calculator in their teaching with female teachers feeling less confident to explain different functions of a calculator than their male counterparts. In addition, the study showed that most of the teachers believed that a calculator was a technological tool that could be useful to the students in the future. On the contrary, most teachers felt that the overuse of calculators by the students could hamper the development of basic computational skills.

Classroom Management and Loss of Time at the Lesson Start: A Preliminary Study

Lesson starts are transitional events which may cause management problems for teachers. In this study 131 lesson starts of equally many teachers were observed in primary and secondary schools in Finland. The results indicated that, in general, the problems were minimal. However, for various reasons lesson starts were delayed by an average of about six minutes. Calculated on this basis, the total loss of instructional time in the whole school year was about five weeks of schooling. No statistically significant relationships were observed between disturbances in the classroom and any background variable studied including grade level, classroom type,(special or mainstream), group size, presence of classroom assistant, sex of the teacher, weekday, time of day of the lesson, or subject of the lesson. In order to maximise instructional time more attention should be paid in future to starting lessons promptly.

Chemistry is one of the subjects that students sit for in the Kenya Certificate of Secondary Education (KCSE). The attainment of students in chemistry in KCSE has been quite low. An analysis of the past Chemistry examination papers taken in KCSE reveals that the papers test students’ competencies in various aspects of Cognitive Science Process Skill of Evaluation (CSPSE). It was hypthesised that school characteristics could be influencing students’ acquisition of various aspects of CSPSE. The school characteristics investigated were social set up (single – sex and co-educational schools) and school location (rural and urban schools). The aspects of CSPSE investigated were: reformulation of scientific statements, evaluation of experimental procedures, evaluation of inferences from scientific data, and evaluation of scientific arguments. Cross- sectional survey research design was used in this study. Cognitive Science Process Skills Test (CSPST) was constructed and administered to a stratified random sample of 386 Form Three Chemistry students drawn from Public County Secondary Schools in Rift Valley Province of Kenya. The findings of the study show that students from single-sex secondary schools performed significantly better than their counterparts from co-educational schools in all the categories of CSPSE. The school location did not have a significant influence on students’ performance on CSPSE.

The Beneficial Effects of Non-received Choice: A Study on Intrinsic Motivation in Biology Education

Previous research has found conflicting evidence in studies where students participate in the selection of their course topics in educational settings. Katz and Assor (2007), for example, have argued that the increase in student motivation is probably not due to the mere act of choosing, but to the value of the options with respect to personal interest. The aim of our study was to investigate the impact of choice on aspects of motivation during biology lessons. Our sample consisted of five classes with 118 children of whom 63% were female. Their average age was 10.4 years (SD=0.6). One group of students was asked to select one topic out of four in a majority vote during a biology class, while a control group was simply assigned the same topic. Results: Students who chose their topic reported a higher level of intrinsic motivation than students who were not given the option. A surprising result was that the students in the voting group who did not receive their preferred choice reported the same level of motivation as those who did.

As an academic discipline, the philosophy of sport has been in existence for a relatively short period. Although the philosophy of sport as an academic endeavour is relatively young, the philosophical view of sport itself is not new. Although sport was a major activity according to the Greeks and Romans, it lost its importance during the Middle Ages. After the Renaissance, education came to be seen as a necessity. With its incorporation and utilisation in the educational curriculum, physical education obviously became more common in the curricula of the Renaissance and Reformation than it had been in the Middle Ages. Opinions about the sport of ancient times have influenced those of the modern era. The aim of this study is to examine the evolution of physical training from the renaissance to enlightenment, which is important because this period has laid the foundations of modern physical training and sport perception. In this study, the literature is reviewed from ancient times to the enlightenment, and the revolutions and developments that have occurred are emphasised.