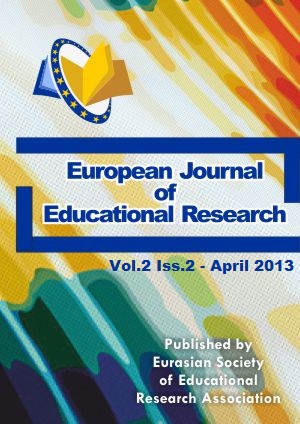 Contents:
A reflection on distorted views of science and technology in science textbooks as obstacles to the improvement of students’ scientific literacy
Florbela M. Calado, Franz X. Bogner
Pages: 51-68 Abstract

Scientific literacy has been increasingly considered a major goal of science education. While textbooks remain the most widespread tools for pursuing this goal within classrooms, they have been slow to adapt to the most recent epistemological paradigms, often still conveying distorted views of science and technology. Accordingly, we present herein a theoretical framework specifically intended to highlight the potential of textbooks to promote students’ scientific literacy. It is additionally argued that, often, the misconceptions conveyed by textbooks represent obstacles to the acquisition of a fair image of science and, therefore, to the acquisition of scientific literacy. Finally, a textbook analysis is suggested.

This study focused on the phenomenon of success at work asking whether it would be possible to find factors from top workers’ children and school experiences that would explain their later success. This study was a part of a larger research in which Finnish top workers, employees of the year, who have been selected as successful professionals of their field in Finland were researched. This article focuses on the narrative data collected through qualitative interviews. In this article, their childhood and adolescence experiences were analyzed in order to find out whether successful development could be enhanced already in early phases of life. This study employed the narrative interview method through which top workers were asked to reminisce their childhood and adolescence experiences. What factors have supported their success and how have they coped with adversities in life? According to the results, the most important key to success at work adopted from home was caring upbringing as parents did not set any ambitious goals for success for their children but made the children think about their future and have an optimistic attitude to life. The role of careers counseling at school was also discussed.

It is well established that girls and boys perform differently in traditional examinations in most countries. This study looks at a sample of 754 school students in Kuwait (aged about 13) and explores how boys and girls differ in the performance in a range of tests related to learner characteristics. The fundamental question is how boys and girls differ in these learner characteristics and do any of the differences relate to examination performance. If the development of such learner characteristic is open to experiences in the formal learning situations, then this opens the door to possible ways to encourage the development of such characteristics, with possible concomitant enhancement of academic performance. It is found that girls outperform the boys in tests which measure extent of field dependency, extent of divergency and skills with the visual-spatial (all at p < 0.001). Confirming previous studies, the girls markedly outperform the boys in all school subject examinations but there are no differences in their measured working memory capacities. In looking at the relationships between various combinations of the measurements made, it is found that boys are much more dependent on working memory than girls in performing in examinations, and the boys are also much more dependent on employing skills related to divergent thought in achieving success in examinations. These observations are interpreted in terms of the way boys and girls learn, with girls being more conscientious and willing to memorise than the boys who, in turn, have to rely on working things out for success: girls tend to memorise; boys tend to try to work it out.

The aim of this study was to determine mental models of 334 pre-school children concerning school. Children in the city center of Kastamonu in the Western Black Sea region of Turkey were included. Content analysis was conducted on pictures drawn by the children, and the models were split into two groups, scientific and nonscientific. The scientific group was split into three types; the nonscientific group, into four. About 40% of the children had a scientificbased school perception, while 60% were nonscientific. No significant difference was found between the mental models of females and males. Few studies have investigated mental models, so this study fills a gap, but further studies would aid the understanding of the relevant pedagogic architecture.